People don't like to commute. It's time consuming and can be frustrating. can be costly — both in terms of finances and well being — so we set out to calculate the true cost of commuting.

But people don't seem to change the way they get to work despite the negative aspects of commuting. According to an analysis of Census data by Eno Transportation, the distribution of people using different modes of transportation (e.g., driving alone, carpooling, or walking) to work has remained steady since 2010. Each year, nearly 80% of Americans commute by driving to work alone. With an increasing population, there are more vehicles on the road, which increases traffic and, therefore, the time people spend commuting to work.

So, with the vast majority of American's driving to work, what's the real cost of commuting?

We were particularly interested in the personal costs related to the time and distance people commute, so we focused on the 80% of people who drive alone to work to best estimate the cost of commuting. We calculated the cost of commuting as the sum of the costs associated with fuel, vehicle maintenance, and time (i.e. the opportunity cost).

Here's how we defined fuel, maintenance, and time; for more details, see our section at the end of the article:

In this study, we'll analyze the monetary, health, and psychological costs of commuting that everyone should consider.

Americans spend $16 billion annually commuting to and from work when we consider the costs of fuel, maintenance, and people's time. We break down those costs :

Americans spend an average of 46 minutes commuting to and from work each day and nearly a third spend over an hour.

That translates to over 200 hours spent commuting annually (assuming an average of 260 working days per year). Those hours cause commuters to lose out on other opportunities, earning money or doing more enjoyable things: an economic concept known as opportunity cost. To calculate the true cost of commuting, we defined the opportunity cost as the wages the commuter could have made during their commute (at their average hourly wage). In 200 hours of work, the typical American worker could earn an additional $5,200 a year.

wouldn't likely swap commute time for more time at work unless they hourly; instead, those 200 hours could for hobbies, spending time with family or friends, or leisure activities.

In a year, someone could get an additional 30 minutes of sleep every day, become best friends with an acquaintance, learn 10 new skills, watch all 23 Marvel Cinematic Universe films plus 100 more 90-minute movies, or fly to the moon and back 23 times if they had those additional 200 hours.

The cost of commuting by added wear and tear, fuel costs.

As of last week, the national average for gas was about $2.60 per gallon. And, according to AAA, the typical cost of vehicle maintenance is 8.94 cents per mile. Considering driving to and from work accounts for a quarter of a vehicle's miles, commuting contributes a great deal to vehicle costs.

On average, commuters travel nearly 23 miles each day getting to and from work, which costs about $2.00 in maintenance and $1.39 on gas. That calculates to 5,907 miles and $1,249 in maintenance and gasoline costs just to cover commuting.

According to our analyses, longer distances to work with lower incomes, so people who are driving the farthest are spending more out of their pocket (as opposed to the potential for earning additional wages) and making less money. As a result, people with farther commutes spend a larger proportion of their income on fuel and maintenance costs than those with shorter commutes. 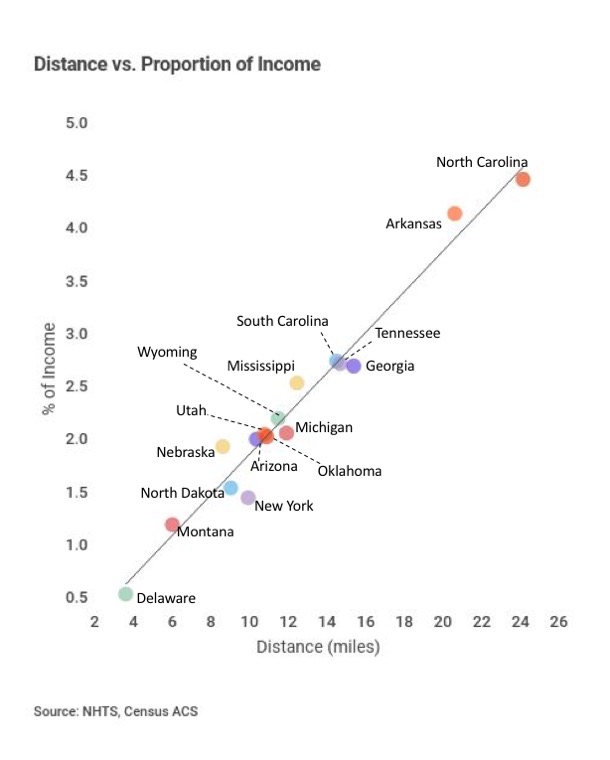 On top of maintenance and fuel costs, the distance you drive to work can affect your vehicle insurance rates. State Farm reported that “people who use their car for business and long-distance commuting normally pay more than those who drive less.”

to people's increased likelihood of a collision, which would increase the cost burden even more; but can also be directly the vehicle's use. Pleasure vehicles, for instance, cost less to insure than primary commuting vehicles under most insurance company plans. We didn't include the potential for accidents or insurance rate differences in our metrics because they're too variable and dependent on other factors, but we estimate that these expenses would be more burdensome to people who commute farther and for more time.

Long commutes contribute to increased stress because of the unpredictability of traffic and driving conditions, which bleeds into people's overall satisfaction with their jobs and leisure activities. A 20-minute increase in commute time, for instance, has the same impact on people's job satisfaction as a 19% pay cut!

Here's what we found: 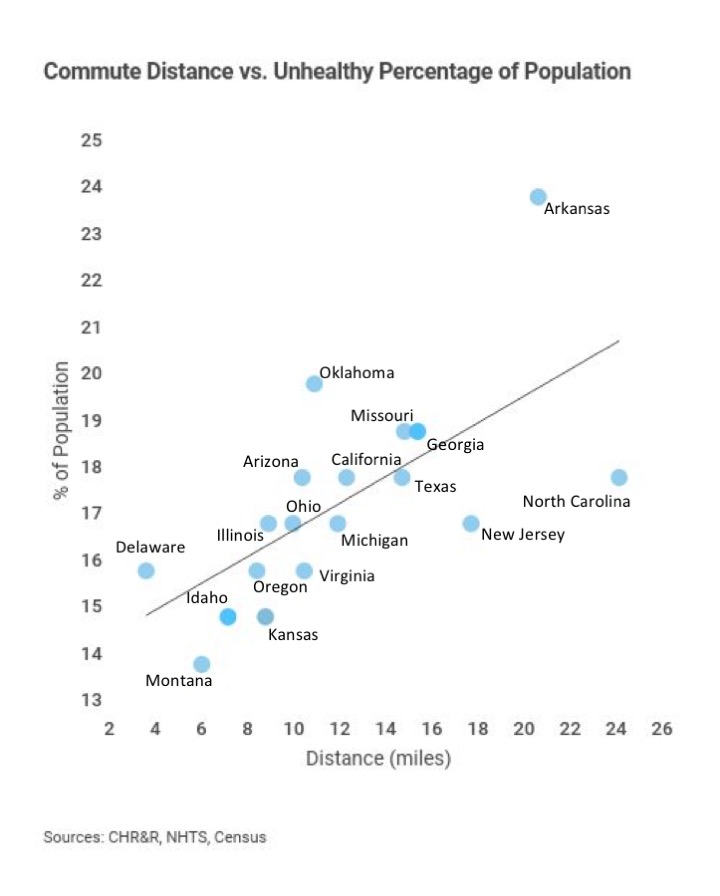 Those findings by past research that suggests there are negative effects associated with long commutes: People who have longer commutes are 33% more likely to be depressed, 46% more likely to get less than 7 hours of sleep per night, and 21% more likely to be obese than people who commute less than 30 minutes to work (one-way), all of which can contribute to poor health. costs might play a role in why commuters also miss more work than those who live closer; adding to the potential for unforeseen consequences of commuting.

Commuting employees' quality of life, it also has repercussions for other teammates and the employer. Commute time, satisfaction in the job, and happiness in the workplace directly contributes to people's productivity at work. the most, losing approximately 7 days of productive work each year — by missing work and being less productive while at work — compared to their counterparts who commute less than 30 minutes each way.

And considering commute to productivity and the likelihood that someone will miss work, people with longer commutes might be a burden to their employers and, therefore, might be at risk of losing their job. For instance, according to Circadian, unscheduled absences cost companies about $2,660 per worker each year, and “fatigued workers cost employers $156.5 billion annually in health-related lost productive time, almost 4x more than their non-fatigued counterparts.”

We county-level data related to commuting from the Census American Community Survey (ACS) data to estimate averages for the time people spent commuting to work, the number of commuters, the mode of transportation, and household mean incomes. Hourly wages were part of the Bureau of Labor Statistics Wage Data. (means based on MSA or state) with the pandas Python library.

Distance traveled to work are estimates from the 2017 National Household Travel Survey (NHTS) by the U.S. Department of Transportation, Federal Highway Administration. The survey is “the only source of national data that allows one to analyze trends in personal and household travel. It includes non-commercial travel by all modes, including characteristics of the people traveling, their household, and their vehicles.”

Health information (i.e., the percentage of the population considered in poor or fair health) from the County Health Rankings and Roadmap (CHR&R), which is a program of the Robert Wood Johnson Foundation in collaboration with the University of Wisconsin's Population Health Institute. We used state-wide averages for “poor physical health days” and “poor mental health days.”

from the Gas Map API.

using linear regressions with data from the CHR&R (unhealthy percentage of the population), Census (travel time to work), and NHTS (distance to work). We used Python's to calculate ordinary squares regressions. significant at the <05 level.

Francesca is a Data Scientist at Clever Real Estate, the free online service that connects you with top agents to save money on commissions. She focuses on helping people understand complex data, real estate, finances, business, and the economy by researching various topics, analyzing data, and reporting useful insights for general consumption. Francesca earned her PhD in cognitive psychology from Texas Tech University and was previously a college professor and behavioral researcher. She can be reached for interviews and questions about studies or data at francesca@movewithclever.com.

Clever Has Partnered with Top Agents to Find Investment Properties

Learn how you could save thousands when you buy or sell investment properties with Clever!