HomeVestors is a national cash buyer with franchises in 46 states.

» READ: Our comprehensive review of We Buy Ugly Houses.

HomeVestors franchisees purchase residential properties "as is" from sellers in difficult situations, such as:

Like other companies that buy houses for cash, HomeVestors looks to make a profit by fixing up and reselling houses. This means that they're looking for a steep discount when they buy properties — sometimes as little as 55% of the home's after repair value, minus any anticipated repair costs.

Homeowners who want to get the most possible value for their home should try listing on the open market with the help of an agent instead. By advertising your house for sale, even if it's in poor condition, you can attract competitive offers and sell for a price that reflects the home's fair market value.

Pros and cons of selling to HomeVestors

How much does HomeVestors pay?

HomeVestors pays less than fair market value, but investors are allowed some flexibility to determine how much they'll pay for a home since each franchise is independently owned and operated.

Like other cash buyers, many HomeVestors franchisees operate using the 70% rule.

This means that they'll pay no more than 70% of your home's after repair value (AVR), minus repair costs. The biggest problem with this formula is that HomeVestors estimates the repair costs for you, so they might inflate their costs in order to make the offer seem more favorable.

Here's how the math pencils out:

In fact, some sources indicate that HomeVestors pays as little as 55% of the after repair value, minus repair costs.

HomeVestors has over 800 franchises in 46 states, so they are widely available to home sellers.

Customers who gave positive reviews of HomeVestors appreciated things like:

On the other hand, negative reviews of HomeVestors focused on things like:

This customer in Florida sold their home quickly enough to close on a new condo:

This home seller in Texas said the HomeVestors franchise they worked with was quick and professional:

A reviewer in Georgia said that her mother quickly accepted an offer from HomeVestors, only to find out later that they listed it a week later and sold from almost $90,000 more: 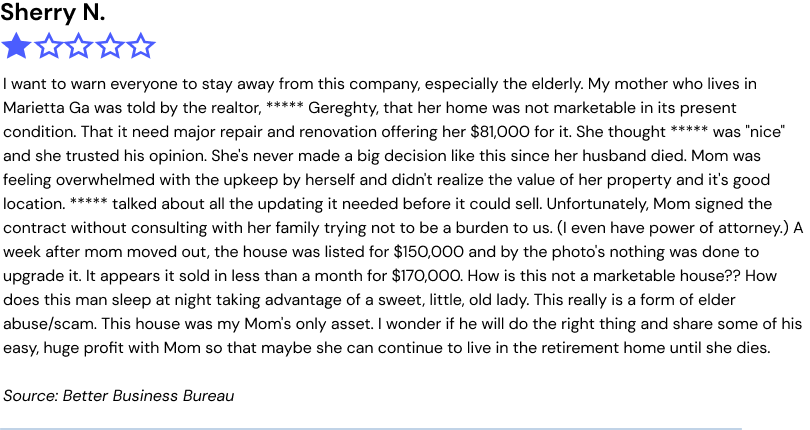 This home seller in Georgia was offended by HomeVestors low offer and felt that the company didn't reflect recent updates that had been made to the home:

HomeVestors is not a scam — it's a legitimate cash buying brand with franchises across the country. HomeVestors pays less than fair market value for houses in order to resell them for a profit.

The quality of service that you receive may vary from franchise to franchise since each one is independently owned and operated. Make sure you do your research on your local franchise to find out if they have a good reputation before contacting them.

Yes, HomeVestors is a legitimate business. The company has franchises across the country that buy homes for cash. Home sellers who request an offer from HomeVestors might be disappointed by how little they pay, but their business model relies on purchasing homes at a discounted price.

As a home seller, the biggest problem you're likely to encounter with HomeVestors is that they won't pay much for your home. Cash buyers like HomeVestors often operate using the 70% rule, which means they'll pay no more than 70% of the home's after repair value, minus repair costs. In fact, they might pay even less than 70% to maximize their profits.

Enter your zip code to see if Clever has a partner agent in your area.

If you don't love your Clever partner agent, you can request to meet with another, or shake hands and go a different direction. We offer this because we're confident you're going to love working with a Clever Partner Agent.