Flyhomes is a real estate brokerage and mortgage broker that offers a home trade-in service.

With Flyhomes, you can avoid a temporary move between homes and win bids on houses in competitive neighborhoods by making all-cash offers. However, if you aren't faced with either of these problems, you might be better off working with a traditional real estate agent or discount broker like Clever Real Estate.

Clever can match you with a listing agent with a pre-negotiated listing fee of just 1%, and help you get up to 0.5% cash back when you buy your next home.

🏠Get started with Clever today and save thousands!

Summary
Good for 👍
Bad for 👎

Flyhomes' core product is its Trade Up program. It costs $100-$200 daily. This can add up quickly, but it might be worth it to avoid having to live somewhere temporarily while you're between homes.

However, if you don't need a home trade-in service, you're likely to get better service working with a traditional real estate agent or discount broker.

Flyhomes' core product, Trade Up, works by pre-underwriting customers for a mortgage within 24 hours. This way, buyers are officially approved for a mortgage before they make an offer. When a buyer's offer is accepted, Flyhomes purchases the home for the customer and gives them 90 days to buy it back.

The catch is that customers have to pay a fee of $100-$200 per day once they move into their new home, because they don't actually own it until their old one sells. This might be worth it if you're in a situation where you'll otherwise need to pay for temporary accommodations. It also can save you the hassle of moving twice.

You have 90 days to shop for a loan with another lender, or finalize your loan with Flyhomes Mortgage. If you use a mortgage directly from Flyhomes or one of their partner lenders, you'll get the 1% lender rebate.

Flyhomes advertises a 5-6% fee for using their Trade Up service, but in reality the total cost is at least 15% when you factor in the closing costs on your old home and your new one.

To illustrate all of the costs associated with trading your home in, let's look at an example:

A Flyhomes customer buys a new house for $300,000 and then sells their old house for $250,000 after being listed for 30 days. We'll also assume this customer qualified for the 1% rebate since they secured their new mortgage with Flyhomes.

*Denotes a cost not associated with traditional home sale or purchase.

Flyhomes operates in competitive markets, so it's unlikely a seller would have to list their home for more than 30 days. Data from Flyhomes shows that their overall selling time to be slightly faster than the industry median, even in hot markets:

Flyhomes Trade Up vs. Opendoor Trade In

Opendoor, one of the largest iBuyers, recently launched a home trade-in service that's similar to what Flyhomes offers and is available in many of the same cities.

The most significant difference between Flyhomes Trade Up and Opendoor Trade In is that Opendoor doesn't charge a per diem fee for customers to live in their new home until they've been there for 120 days.

Opendoor has a 90-day buy-back guarantee for customers who aren't satisfied with their new home. There's a 3% fee for using this guarantee.

Flyhome's guarantee for buyers is that they'll stage and list the new home for free within one year of the purchase date if you're not satisfied. However, you'll still have to offer 2.5-3% to a buyer's agent.

This means that customers who buy Opendoor homes have a guaranteed way out if they change their mind, but they only have a 90-day window to exercise that option.

Flyhomes customers in the same situation have to relist and wait for a private buyer to purchase the home, but they have up to a year to do it.

Buying with Flyhomes can make your offer more attractive to sellers since it's all cash and it's backed by the Flyhomes guarantee, which means they'll purchase the home even if you change your mind.

Flyhomes advertises their 1% rebate for buyers as a serious incentive for buyers to use their service. In reality, you'll only get this rebate after closing if you use a Flyhomes mortgage, and it might still be worth less than the additional interest you'll pay.

How buying with Flyhomes works

When you start working with Flyhomes as a buyer, they'll pre-underwrite you for a mortgage in 24 hours so you're fully approved before you even start looking at homes.

Buyers can book tours using the Flyhomes app. A Flyhomes agent will meet you at each house to walk you through and present you with all of the information about the property.

Once you've chosen the house you want to buy, Flyhomes will submit an offer on your behalf. If the offer is accepted, you can close in as little as ten days and move into your new house as soon as possible.

After you've moved in, you have 90 days to shop around for another loan or to finalize your mortgage with Flyhomes. Once your financing is finalized, you buy back your new home from Flyhomes. All of the fees, including the $100-$200 per diem fee, are charged when you take ownership of your new house.

Is the Flyhomes rebate worth it?

You'll only be able to get the 1% Flyhomes rebate after closing if you borrow directly from Flyhomes or one of its partner lenders. But you might save more money in the long run if you give up the rebate and find a better mortgage rate somewhere else.

A difference of 0.2% might not sound like much when you're promised extra cash after closing, but if you plan on owning your home for more than five years, you should shop around for the best rate before you sign up for a Flyhomes mortgage.

As the buyer's agent, Flyhomes gets paid by the seller, so there's no official fee for buying with Flyhomes.

The largest fees a buyer will encounter when they're working with Flyhomes are the loan origination fees if they use Flyhomes Mortgage, which can be as high as 3% compared to the industry average of 0.5-1%.

If you choose to use Flyhomes closing services, you'll pay fees comparable to the industry standard.

The Flyhomes guarantee for buyers

Flyhomes will stage and list your new home within 12 months of the purchase date if you're unsatisfied with it for any reason.

This guarantee can save you up to 3% in listing commission when you need to sell, but you'll likely still need to offer 2.5% to 3% to a buyer's agent as Flyhomes doesn't cover this expense.

You'd also need to cover all of the seller closing costs yourself (title, escrow, etc.) in this scenario.

Home sellers can list with Flyhomes for a listing fee of 2-2.5%, or as little as 1.25-1.5% if they opt out of additional listing services like cleaning, staging, and virtual tours. However, you'll still have to pay 2-2.5% commission to the buyer's agent.

Without the add-on services, listing with Flyhomes is similar to listing with a discount broker, since you get the benefit of exposure on the open market without paying full commission.

Unlike Flyhomes, listing with Clever can give you the benefit of excellent service at a fraction of the price.

Flyhomes guarantees home sellers that they'll purchase their home if a buyer backs out after all of their contingencies have been met. The catch is that this guarantee only applies if the buyer is also a Flyhomes client.

There's no obligation to use this guarantee if the buyer backs out — you can continue to look for better offers.

The total cost to sell a home with Flyhomes ranges from 5.75-10.5% of the sale price when you include commissions, closing costs, and deductions for repairs.

Flyhomes is only available to home buyers and sellers in:

Customers can use Flyhome Closing to streamline their transaction, but you're allowed to shop around for the best possible escrow and title insurance rates.

Flyhomes charges a flat rate of $1,000 plus tax for all purchase escrow. This means if you use Flyhomes Closing when you trade-in your house, you'll pay the $1,000 flat fee twice — once when you're selling and once more when you're buying.

Title insurance rates are based on a percentage of the home's value, with higher value homes getting a more favorable rate.

The majority of Flyhomes reviews from customers on third-party sites are positive, with an average rating of 4.95 across 610 reviews.

Payson W., a home buyer in Seattle, said she would recommend Flyhomes to buyers because it's easy and the service was very professional.

Aria W., a customer who traded her home in using the Flyhomes Trade Up program, said that the per diem cost was well worth it just to avoid the hassle of moving twice. 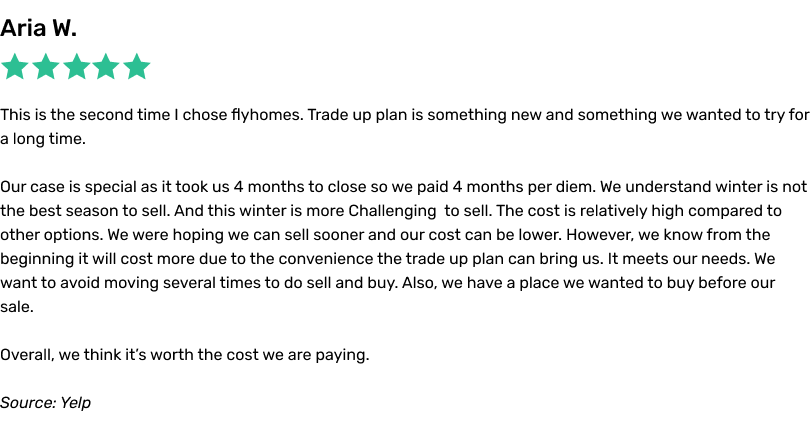 Youngsochun, a homeowner in Seattle, also used the Trade Up program. He said being able to make an all-cash offer gave him more leverage to negotiate a better purchase price.

Will T. a home buyer in California, said that Flyhomes negotiated terms that favored the seller and focused on their timeline more than his.

Christina A., also a home buyer in California, was frustrated with the lack of consistency when she was ready to buy a house with Flyhomes.

Nicole B., a home buyer in Seattle, experienced poor communication from the Flyhomes team — particularly when she asked questions about getting her rebate. 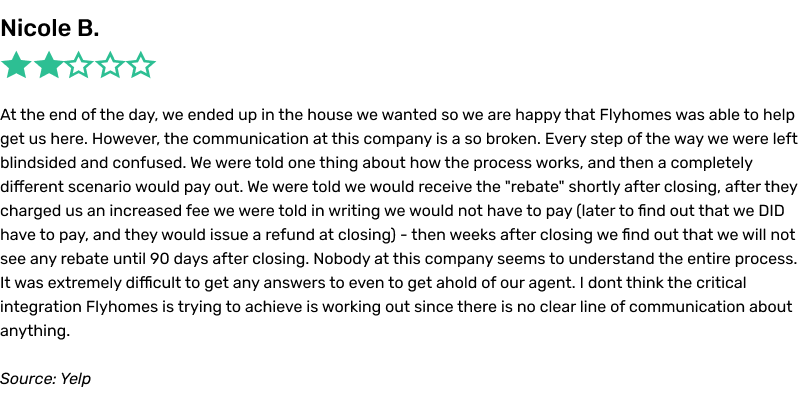 Is Flyhomes an iBuyer?

Flyhomes does purchase homes, but only for a short period of time to facilitate a home trade in for a customer.

For home buyers, Flyhomes purchases the new home upfront and then allows the customer to buy it back once their old home sells.

Flyhomes gives home sellers a backup offer — it will buy your home if it doesn't sell on the open market after 90 days.

How much does it cost to use Flyhomes?

Customers who sell with Flyhomes can expect to pay 5.75-10.5% in total selling costs.

Customers who buy using Flyhomes pay a 0.75-3% loan origination fee, plus costs for escrow, title insurance, and other buyer's closing costs. Buyers who obtain a loan through Flyhomes Mortgage are eligible for a 1% credit after their sale closes.

Where does Flyhomes operate?

Flyhomes is currently available to buyers and sellers in:

Enter your zip code to see if Clever has a partner agent in your area.

If you don't love your Clever partner agent, you can request to meet with another, or shake hands and go a different direction. We offer this because we're confident you're going to love working with a Clever Partner Agent.